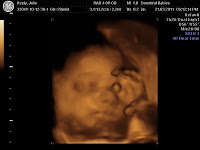 April 1st already. It has been a long winter. As a matter of fact they are expecting a snowfall and its April Fools Day. Morgan's ears birthday is coming up in April. Our new ear will be celebrating it's first birthday. Another perk of a CI kiddo. 3 birthdays a year! Morgan has done an astonishing job with her new ear. Someone would never know she is totally deaf! She is planning on going to Pennview again next year but just in case the money part doesn't work out we are also preparing the public school in our area for her arrival. They have had only one CI kid in the past and he was very old when he was implanted. That being said, she is actually their first CI kid implanted at one year old. I don't think they know what to think. They are still from the old days where they think she needs "speech theapy" meaning pronouncing sounds. They don't understand the listening part. At Pennview Morgan doesn't need an FM system or soundfield. They have done an amazing job with her and providing an environment that is superb! Thank God we found each other. Hopefully she will be attending Pennview again next year. Morgan's baby sister is almost here. Rylee is her name. She is over 15 inches long at this poing and a whopping 3 lbs. We are still hoping she can hear. She seems to like the song Turkey in the Straw but we will have to wait and see. Hope and Faith are what we have going for us! The other night Mommom was saying her prayers with Morgan. Mommom of course asks God to let Rylee be a healthy hearing baby. Morgan's turn is next and she proceeds to ask God to not listen to Mommoms prayers and make Rylee a baby that can hear but only with implants! Mommom said, Morgan you are not allowed to override Mommoms prayers! This will be an interesting journey no matter what the outcome.

Here is a 3 D picture of Rylee.
Posted by Morgan's Mommy at 1:41 PM 1 comment: Links to this post