Last Thursday when I took Morgan's Implant out(she wears a mold in her ear to keep the implant from falling off) I noticed what looked like a little bit of dry blood draining from her ear. That ear which is the left one is the ear that still has a tube in it. I called the resident ent on call that night to see if there was anything I should do. She just told me to put a couple drops of the floxin drops in her ear and I would get a call in the morning. Friday morning I get a call from one of the ENT nurses, she says it sounds like her tube might have come out and its just irritated from that. She calls in a prescription for more floxin drops which she needs 5 drops twice a day and also an antibiotic to take just in case it was drainage from and ear infection. I wasn't to thrilled with having to put her on medicine if I didn't need to. I asked the nurse to have Dr. Germiller call me since they couldn't see Morgan that day. Dr. Germiller did call back..her is the greatest! He said it could be the tube coming out or a granuloma which is a ball-like collection of immune cells trying to destoy a foreign substance . Dr. Germiller wasn't seeing patients on Tue but he said that he would fit Morgan in since we were going to be in the area. Morgan had school at Clarke that morning and then we were off to CHOP in the city. Morgan made little I Love You sign language choc lollipops for Dr Germiller to take home to his kids, and also we took him homemade sticky buns. She was excited to see him until she realized that he was going to be looking in her ear. He used a vacuum to suck all the junk out of her ear, which seemed like it took forever because it took me to hold the top part of her down against my chest and my Mom had to hold her legs down, and the Dr. was holding her head as much as he could. Boy is she strong, my arms hurt after that. It didn't hurt her but just being held down made her mad, she was fighting us so bad. Finally after all the sucking and having to replace the instrument he was using, because it got clogged he pulled out a granuloma from her ear. It was alittle bigger than a pin head. We were all done. Now she is on strong ear drops for 10 days. She was so exhausted from fighting us she was starting to fall asleep in my arms. Poor baby! She just kept saying "all done Mommy, all done" and she kept saying "car Mommy" I felt so bad. We go back in March for a recheck.
Posted by Morgan's Mommy at 1:53 PM No comments: Links to this post 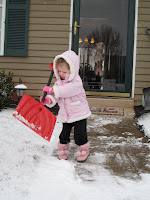 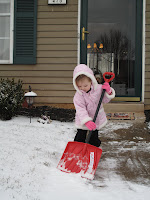 I bought Morgan a snow shovel in hopes that it would snow enough for her to get to use it, and sure enough we got a little snow overnight, nothing big but enough for her to shovel. She loved it!
Posted by Morgan's Mommy at 3:16 PM 1 comment: Links to this post 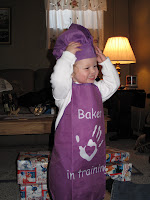 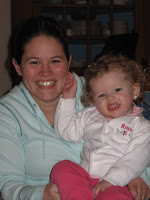 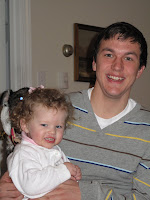 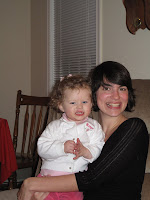 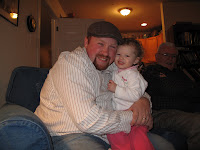 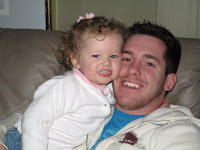 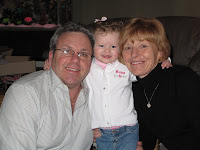 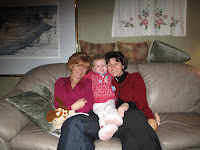 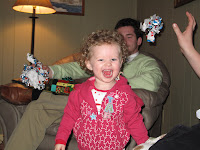 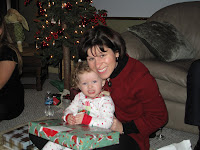 This was Morgan's third Christmas, and by far the best one, even thought we got another ear infection. Morgan went to the Dr's on Dec 23 and had another ear infection in her right ear...yuck. She got on some antibiotics and was feeling better for Christmas. She got so much stuff I don't know where to put it all. She was really starting to understand the whole Santa thing this year, but wanted nothing to do with sitting on his lap. She would wave HI to him from the second floor at the mall but that's was as close as she was getting. We had a busy day on Christmas...Mom Mom, Pop Pop, Uncle Jamie, and Aunt Cheryl came over in the morning to see Morgan open all her presents from Santa...shortly after that was done we went to Mom Mom's for Christmas lunch with Aunt Marcie, Uncle Luke, Tyler, Kacie, Megan, and Grandpop. Morgan got her awesome art desk from Mom Mom and Pop Pop! We just kept moving,after that we headed to Grandmom and Grandpop Slaymaker's house for Christmas dinner...Morgan got her bitty baby twins there, she just loves her babies! We were all so exhausted, but it was a great day.

Posted by Morgan's Mommy at 2:47 PM No comments: Links to this post

Nov 21, 2008-we went to CHOP in Philly for Morgan's Speech therapy and mapping. We first started with the speech therapy at 9 am, we got taken back right away. Morgan's teacher Sherri from Clarke came with us today, and let me say thank goodness for her being there or it would have been a total disaster. She is the best!! Sherri came with a big bag filled with a bunch of toys and listening games. I need to remember to do that for the next visit. Marybeth was her speech therapist today...Morgan is a little on the shy side when she first meets someone and it takes her a little while to warm up, and unfortunately there is no time given to warm up. They take you back and start drilling right away. They were asking Morgan questions about pictures that I didn't even know the answer too. One was a picture of a girl and a boy both in rain coats and boots with hats on..."Morgan which one is the boy?" My gosh I couldn't even tell. Another one was a boy with and umbrella standing in a rain puddle, a boy on a bike, and two other pictures, I can't remember. The question was " Morgan Paul's shoes are wet, whats it doing outside?" I was like oh my gosh this a 2 yr old we are talking about here. So needless to say I walked out of the speech therapy room a little disappointed because I know Morgan could have answered, and done a lot more for this therapist is she wasn't so rushed and knew her a little better, I didn't know how she was going to score. As we were walking out to the waiting room where my Mom was waiting for us Sherri kept assuring me that Morgan did great and that we know her better than anyone, and we know what she knows how to do. Sherri was a great peace of mind, as my Mom could tell I was ready to cry. While we were waiting to get mapped Marybeth came out to us with Morgan's results. Expressively Morgan measured at a 2 yr 6 mo old....right at her age level and receptively she measured at a 2 yr old which is right were she should be for that. Pretty awesome that she was able to make up almost 2 yrs worth of language in a years time. After the test results I was feeling a little better, even though the therapist had some things she wanted to watch for, like a nasal sound, and the repeating questions. I figure for the first year of her life we were trying to get her to repeat everything and now we don't want her to...geez. Overall Morgan is doing EXCELLENT! I am so proud of everything she has done. Shortly after Michale Jackson her audiologist comes to get us. We started in the booth. Sherri, my Mom, and myself were all in the booth with Morgan. Michael gave us a huge bucket of Mr. Potato head stuff. Yet again thank goodness for Sherri and her bag of toys and expertise. Morgan first started with her listening check which she did very well at, next Morgan had to repeat the sounds that Michael was saying from the other side of the booth through the two way mirror...Sherri pulled a play microphone out of her bag and Morgan sailed through that one too. Next Michael dumped all the potato head pieces out and there were so many parts. He wanted her to put the different pieces in the potato head. I was very sceptical as Morgan does not play with Mr. Potato Head very often, and with the million pieces to pick from it was hard for even me. Thanks to Sherri after a bit she decided to put Mr Potato Head together and then ask Morgan to take the particular part off that Michael asked her too. She did awesome at that. Finally done the booth. Then we went in to be mapped...not many changes where made as her programs were pretty good. Michael was able to alot of testing due to Morgan being so cooperative and doing really well with the listening game. Sherri had a puzzle in her Mary Poppins bag and she played the listening game with Morgan using the puzzle. The listening game for those that don't know is where Morgan would put the puzzle piece or a block etc up to her ear and listen for a sound, beep, ling sound, almost anything. When Morgan hears the sound she puts the puzzle piece in the puzzle or a block in a bucket etc. or they may do ling sounds like "ahhh" "eee" "sss" "shhh", and then Morgan repeats what she hears and then puts the puzzle or block piece in. See all this repeating they want her to do and now they don't want her to repeat things....lol. After about three hour of being at CHOP and Morgan being on her best behavior we took Morgan out to lunch and did a little shopping!
Posted by Morgan's Mommy at 2:17 PM 1 comment: Links to this post

Sorry its been so long since I last posted...Well on Nov 20th, 2008 Morgan went to see Dr. Germiller (our favorite Dr.) for her regular check up for her tubes and her implant site. Our appt was for 9 am and we were not taken back until 9:50 am...so much for getting an early appt so we wouldn't have to wait long. Morgan's right tube is out and the left one remains in, thank goodness. We have had and ear infection at the end of Aug and in the beginning of Nov in that right ear, lets hope we don't get to many more or we will have to have another tube put in. The implant incision looks awesome...you can't even see it! That was pretty much it for that appt. we don't need to be seen for another 6 months.
Posted by Morgan's Mommy at 2:09 PM No comments: Links to this post