Well this month has been very crazy!  Morgan started going to school for the full day now instead of 1/2 day.  She goes to Mrs. Mcamy in the afternoon for more fun and education...she is one smart cookie!  She loves going and asks to go everyday!   We found out that we are officially schedule for a 2nd "ear" on April 21st.  I am so excited yet so nervous.  I over analyze everything so I am starting to wonder if we are doing the right things.  Thanks to my friends on CI Circle I feel much better about it.
January 13th-was a crazy horrible night.  Morgan woke up with vertigo.  She was so dizzy she couldn't walk, and she kept bobbing her head to the right side.  I was so scared.  Even though she had a dizzy spell over a year ago it was still really scary.  She threw up a few times and then finally fell asleep for the rest of the night.  Which wasn't very long since we didn't fall asleep until about 3 am.  She wasn't dizzy anymore when she woke up, but was still a little unsteady walking.  We went to the pediatrician right away at 9 am to have them check her over and make sure her ears were not infected.  Everything checked out good.  Also was in contact with Dr. Germiller and his nurses.  There weren't to concerned about anything and had us watch to make sure she didn't get really high fever in case of meningitis and that if she showed signs of ear infection to take her to her dr.  Well she ended up getting an ear infection that Saturday night into Sunday(Jan 17th)  The Dr said there was lots of cloudy, mucky fluid in her ear and it didn't look nice.  He told Morgan he was looking for potatoes in her ears, and then when he saw that he told her she had rotten potatoes in that ear.  She really enjoyed his humor.
January 28-we have an appt to see Dr Germiller for a checkup and to see if we need tubes put in before the implant surgery, since we had another ear infection.  During the check up they asked a bunch of questions for the anesthesia part of her surgery to get that out of the way and Dr. Germiller also still found some fluid in Morgan's right ear.  It wasn't infected but it just wasn't draining all the way.  He had them to a tympanagram to see if her ear drum was moving, and the results were just what he had suspected.  Not moving very well from the fluid.  He also had them take an xray of her neck and head to look at her adenoids, to see if he needed to remove them.  Luckily they are normal and can stay put.  He will need to put new tubes in on Feb 19th though.  So we can get rid of the fluid and have time to recover before the big surgery.
Here is a copy of the x ray that they took, you can see the implant that is inside of Morgan's head... I thought it was awesome. 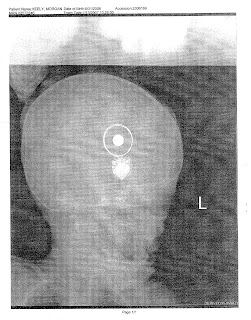 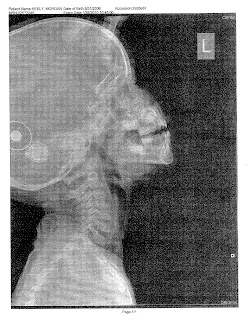 End of One Year/Beginning of a New Year

Well I have made a promise to myself and Morgan that my New Years Resolution is going to be to keep her blog updated on a regular basis from now on.  I just let life get in the way of sitting down and writing and sharing some of the events that  have been going on.  So in this post I will fill you in on the end of 2009 and the beginning of the New Year 2010.

Oct 20th, 2009
Morgan had an audiologist and speech therapy appt at CHOP.  She was first tested in the booth and did very well, heard things that I myself couldn't hear.  They didn't really change to much on her mapping except that the little light that would always blink red is now reprogrammed to only flash red when there is a problem, such as the magnet falls off her head or something is wrong with the coil, processor, or microphone.  So far that has been going very well.  Her teachers seem to like that much better!  They have less to watch for and they know for sure is something isn't right.  I have so videos of Morgan in the booth being tested and what she has to do in the booth.  She also had her speech therapy appt, they said you could line up a bunch of "normal" hear kids and you would never be able to tell that Morgan wasn't one of them.  She fits right it.  What more could a Mother ask for.  She was testing at a 4 year old level in some things and then age appropriate in others.

Dec 18th, 2009--Morgan had her first dose of the swine flu mist vacine.  Nothing to eventful with that thank goodness.

Dec 24,2009--Morgan started her Christmas Eve with a hearing test with her hearing aid on her right ear.  She just didn't undstand why she couldn't have her implant on.  She kept saying I can't hear its not working.  If that isn't enough proof that she can't hear with the help of a hearing aid then I don't know what is.  Needless to say she is approved from the audiologist stand point.

We had a GREAT Christmas, and I think santa was very good to everyone.  Morgan was as the perfect age for everything this year and she really understood santa this year, and loved sitting on his lap. She has been still going to Theraplay once a week and doing great there.  Her two favorite therapist are Lindsay and Emily.  She basically won't give the other poor girls the time of day if she has them.  But is a little chater box for the other two.

Penn View continues to do a fantastic job with Morgan.  On the 29th of Dec we all got to go watch her in her first play.  She was the cutest little lamb, and she sang her little heart out to Away in a Manger and Jingle Bells.  It brought tears to all of our faces hearing a deaf child sing so beautiful!

I promise to do a better job at updating this.  It makes it hard when I can't sign in on my own computer at home for some reason...I need to get that checked out.
Posted by Morgan's Mommy at 2:22 PM No comments: Links to this post