How many kidney stones can a 7 year old make?

Saturday the 21st we met Morgan's new surgeon. He actually works on Saturdays at CHOP. Needless to say Morgan was very upset before, during and after the appt. We will be looking at 2 scenarios. Best case scenario is when they start surgery they see the camera and tools fit in her little body parts and they have no trouble getting either a 6mm lone stone or they find a cyst filled with lots of small stones. They could do another cat scan now to see if its a cyst or one stone but we opted not to put her thru under test when surgery has to be performed regardless.  If its a cyst they will also burn it so that it only has a 2% chance of coming back.

Next scenario would be the issue of the camera not fitting and a stent would need to be put in and surgery would happen at a later date. This way she would most likely need 3 surgeries and we all know Morgan has been thru this too much already.

On a brighter note Christmas vacation has been wonderful. Today we are going to Disney on Ice.

Who says Friday the 13th is bad luck? 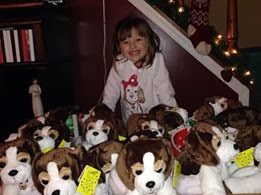 Tomorrow marks the 200th stocking or sand bucket delivered to the children at CHOP!

Friday December 13, 2013 will be a special day for many children at CHOP.  Morgan is hoping to make many children smile when they get their stocking with Woofi inside it.

Morgan has had to work harder than ever to make this donation happen this time around.  She made an extra donation this year in October which put her behind on gathering enough money to buy the Woofi's.  She put the word out and received the needed help from her supporters.  Morgan is so thankful for the outpouring support she has received.  She wouldn't have been able to make this happen without everyone!  The kind man from the Lehigh Valley purchased all the stockings for her. A man she has never even met. There are so many angels among us!!  We don't think some of our helpers know how  truly thankful Morgan is for their undying support.

Merry Christmas and Happy New Year to you and your wonderful families!

Posted by Morgan's Mommy at 7:21 AM No comments: Links to this post