Well Morgan is doing well after her surgery on Friday afternoon.  Boy what a day.  My Mom came with me this time and it was her first and last.  Its so hard to see the stuff these little kids have to go through. We arrived at 12:30 pm and they checked us in and took us into a room pretty fast which was nice.  There they gave Morgan a gown and a pair of pants to wear, and a pair of socks.  She looked like a yellow duck. They took all her stats like her blood pressure, oxygen, weight (27 lbs), height, temperature etc.  Then she had some downtime until it was time for the giggle juice.  The Dr came in and asked if we had any questions, and the  anesthesiologist came in and gave us a run down as well.  He said since its such a short surgery there was no need for an IV "unless" certain things happened.  He listed a couple things but said don't worry it only happens like 2 times out of a 100 or its only a 5% chance.  I looked at my Mom and said he doesn't know Morgan very well.  She is always in the small percentage.  She didn't want to take the giggle juice so we had to make her take it.  Not fun.  When that started to kick in she got more limp and heavy.  Kinda like a baby.  She wasn't able to walk on her own so she had to stay in my arms the whole time.  She kept pulling up her gown and showing her belly to us and the nurses and giggling.  She thought that was pretty funny.  I guess thats why they call it giggle juice.  We gave her hugs and kisses and watched the nurse pick her off my lap and walk away with her.  Its the worst feeling in the entire world.  I really hope she never remembers it.  Off to the waiting room we went.  We got to talk with another nice family that was also waiting for their little girl to get out of surgery.  Dr Germiller then came out after about 15-20 min and said everything went great.  If she didn't get those tubes in today he said, she would have been at the dr that night or the next morning with an ear infection.  He drained alot of yucky cloudy fluid of of her right ear.  Then the anesthesiologist came out and we asked "how did everything go?".  He said "ok Now".  My Mom and I were like what do you mean Now?  Well believe it or not Morgan was  one of the few that had a small issue with the anesthesia, I can't remember what he called it but what happened was her vocal cords closed up, its the brains way of protecting the lungs from getting any fluid in them.  So they needed to put in an emergency IV so they could give her a muscle relaxer to release the vocal cord muscles.  Thank goodness though before they put anything in the IV her vocal cords released on their own.  She was all out of sorts when she first started to wake up.  She fell back asleep for a little while and then woke up a little better the second time once she realized it was me holding her and it was all over.  She then freaked out when the nurse tried to put a band aid on her IV when she took it out.  Morgan is the only kid I know that HATES band aids.  I can only imagine how she is going to be with a big bandage wrapped around her head in April.  Then we got all dressed to go home and Morgan gets sick all over both of us.  Didn't think to bring extra clothing.  We left shortly after.  All her color came back after that.  As soon as we got in the car she was asleep for the rest of the ride home and afternoon.  She had a lazy night of lying around until Aunt Marcie, Kacie, and Megan came over to give her an art set for being such a brave girl.  She was then up and running around and giving them a fashion show with her new bathing suit and summer dresses she got the other week.  She needs drops in her ears for the next week and boy I can't wait until that is over.  She hates them and it takes both Ben and I to hold her down and get them in her ears.  She always says they hurt but I don't know of anyone who really likes cold liquid being in their ears.  That part will soon be over!  Another milestone accomplished for Morgan!  Morgan you are such a Trooper and I am so pround to be your Mommy!  I love you! 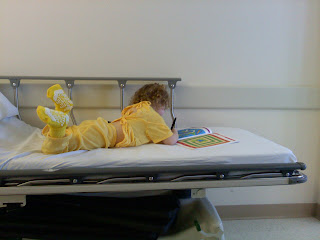 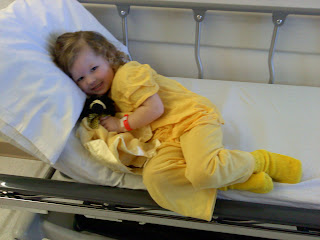